So far, I put the EQ5 motor drive to the Vixen GP equatorial mount and have been taking photos of nebulas etc. with Fujifilm X-E2 mirrorless camera at the direct focus of a 15cm F5 reflector. No feed back control of the guide allowed about 1min of exposure. Also, I took planets by mugnification with eyepieaces.

The planet images by this method was not the best and I looked for a bargain of astro CMOS cams... then found a discounted ZWO ASI120MC-S, and also found that the one has a ST-4 auto guide port!

Furthermore, I found the fact the EQ5 motor control can be added with a ST-4 port easily by DIY. ♫

Anyway, first I tried a planet photo with this camera... 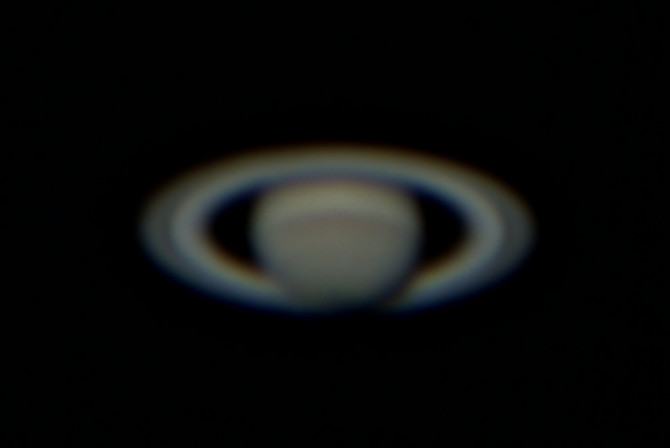 It shows the Cassini gap better than those I took by X-E2 JPG mode.

I have not tried Jupiter. Weather is not good recently...

The connection of the camera, mount and a PC is like this:

Camera--PC: The USB cable came with the camera. I use PHD2 on a Linux PC for auto guiding.

Camera--motor controller: ST-4 conpatible cable. This transmitts the RA and DEC correction signal from the camera. I only use the RA motor, so what I do is the single axis auto guide.

I need a DIY to put the ST-4 port to the motor drive controller. I checked the above mentioned web sites, but they are a bit confusing. The information about the position of leads and terminals are not consistent.

Then, I checked the manuals of the camera. "Software Manual of ASI120" shows this figure: 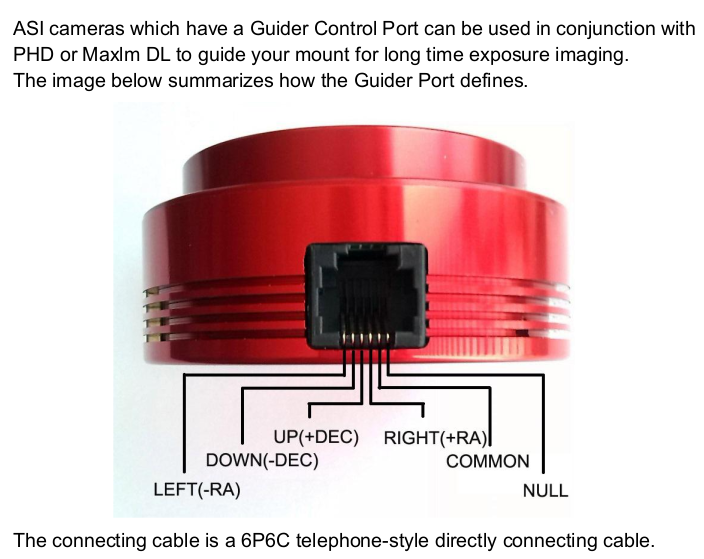 Figures for the terminal arrangement in the "ST-4 compatible port" are found at several places. But the direction of the figures are often not clearly defined and that brings ambiguousness. This photograph makes it clear :-)

The "ST-4 cable" is also called 6-pin 6-core modular cable (RJ-11 6P6C)(usual telephone cables have only 4 or 2 leads). One cames with the camera, and I need another to add the port to the motor controller. I found one from "uxcell" brand at Amazon.co.jp and got it. Depending on products, sometimes it happens that the stripping of the lead insullation is not easy and the naked leads are too fragile (e.g. Miyoshi MCO brand). The one I got was good. 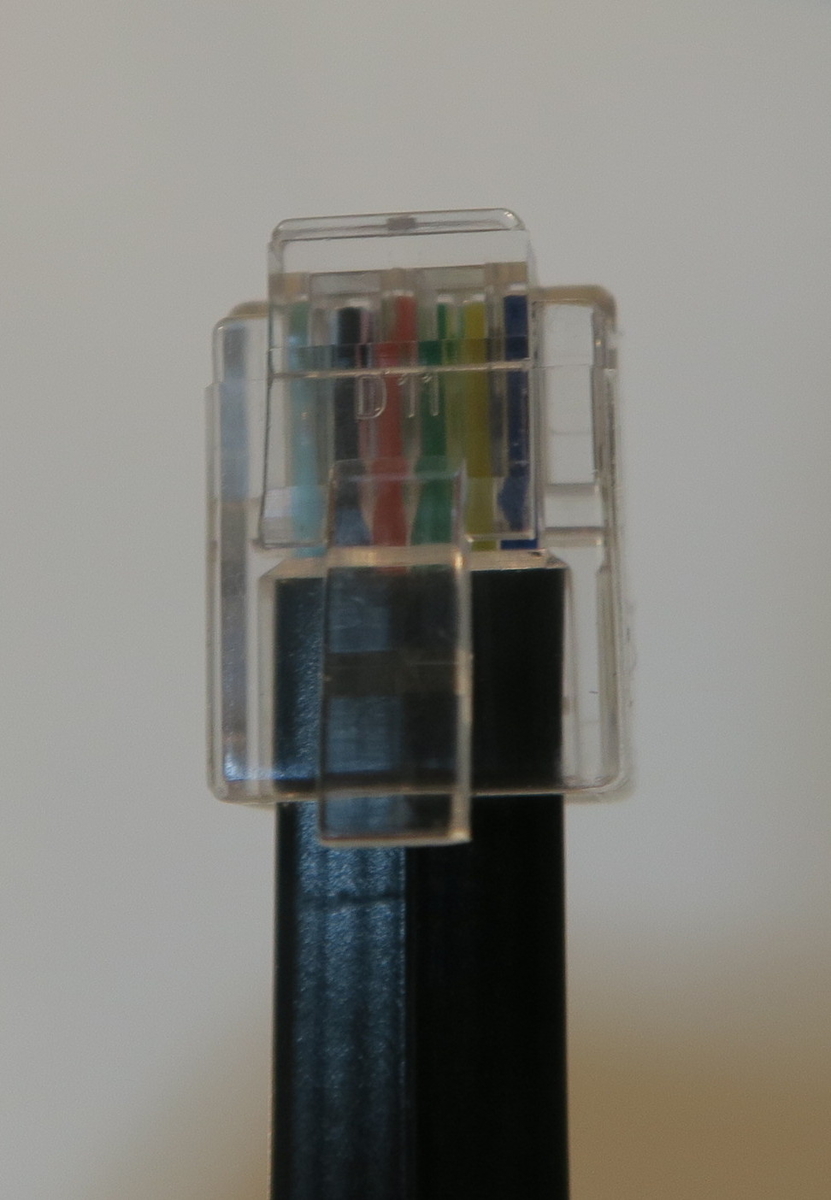 Comparing with the camera's port above, the roles of the leads are as follows (right to left).

The lower four corresponds to the direction buttons in the controller. Thus, the soldering on the PCB (printed circuite board) is like this. 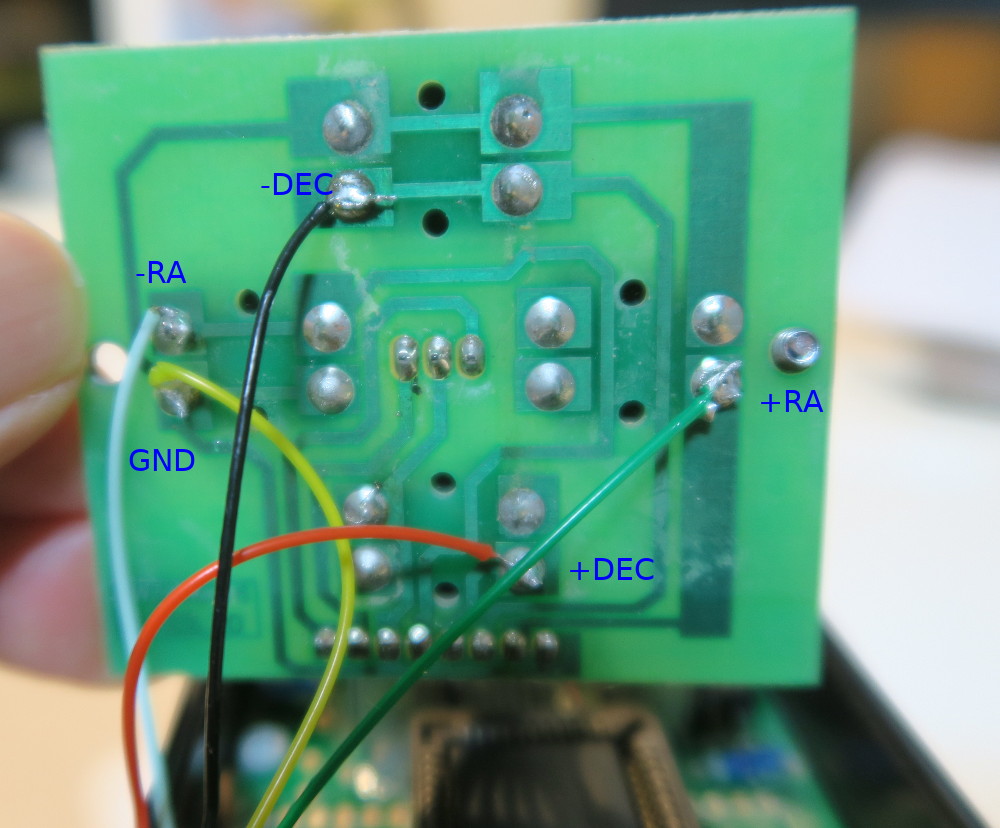 I use only the RA motor, and do not need the DEC corrections. But I put DEC leads just in case. The NULL (blue) lead was cut short not to interfare any naked contacts in the box.

It looks different from the photo shown in the web site above "EQ5 Dual Axis ST-4 Guideport Mod" though the lead I used has the same order of the lead colors as them. Wich is wrong? Anyway, I connected it to a PC and tested with PHD2, and it seems to work correctly. So it should be OK.

I removed the DEC motor cable and used the hole for it to let through the ST-4 cable. So, I did not need holing in the box.

For checking with PHD2,

2, Start PHD2 and do the connection.

If the connection is correct, "West" gives 2x rotation and "East" gives stop (when the speed switch is at 2x). The LED at the center of the controller turns color from green to red during the correction just as when you push the button on the controller.

Can not wait the next clear night for a real test...